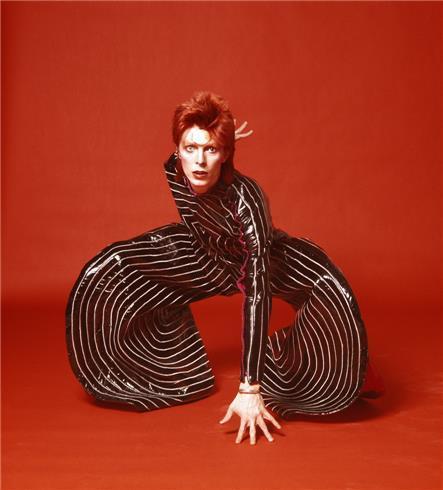 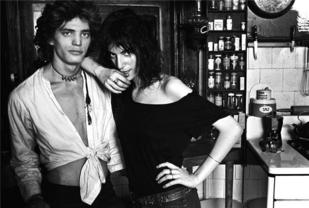 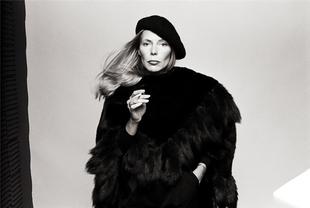 
Morrison Hotel Gallery and Motocinema are proud to announce the exhibit, Picture Start, at the EPIC Hotel in Miami during Art Basel. The exhibit will be up from December 2nd through the 6th.

Picture Start will feature photographs by Masayoshi Sukita, his iconic photos of David Bowie have only been shown once before in the United States at the Morrison Hotel Gallery. Also featured are larger than life size images of Mick Jagger and Keith Richards by legendary photographer Norman Seeff. The gallery also has a stunning sales suite in the hotel so please make sure you visit us there.

To schedule an exhibition viewing or a sales consultation, please contact our SoHo, NYC Gallery and Sales manager Jeremy Ross


My travels have always been of the same kind. No matter where I’ve gone or why I’ve gone there, it ends up that I never see anything. Becoming a movie star is living on a merry-go-round. When you travel you take the merry-go-round with you. You don’t see natives or new scenery. You see chiefly the same press agent, the same sort of interviewers, and the same picture layouts of yourself.

I thought Japan would be different because the Studio had wiped its hands of me. The Publicity Department had received instructions to spike all Monroe publicity. I was to be given the don’t-mention-her-name treatment.

Joe was very happy to hear this, but he didn’t stay happy long. From the minute the Studio washed its hands of me, my name started popping out of big front page headlines. Joe’s too.

Seeing your name in front page headlines as if you were some kind of a major accident or gun battle is always startling. No matter how often you see it you don’t get used to it. You keep thinking—”That’s about me. The whole country’s reading about me. Maybe the world is.”

And you remember things. All your hungry days and hysterical nights step up to the headlines and take a bow.

Japan turned out to be another country I never saw. An Army officer came up to our seat in the airplane as we were approaching Japan. He was General Christenberry. After introducing himself, he asked, “How would you like to entertain the soldiers in Korea?”

"I’d like to,” my husband answered, “but I don’t think I’ll have time this trip.”

“I wasn’t asking you,” the General said. “My inquiry was directed at your wife.”

“She can do anything she wants,” said Joe. “It’s her honeymoon.”

He grinned at me and added, “Go ahead.”

Joe stayed in Tokyo, and I went to Korea. My first stop was in a hospital full of wounded soldiers. I sang some songs including one called, “Do It Again.”

The soldiers were wonderful. They cheered and applauded as if they were having a good time. Everybody loved everything I did except the officer in charge of my Korean tour. He took me aside and told me I would have to change my material.

“What material?” I asked.

“That song, ‘Do It Again,’” he said. “It’s too suggestive to sing to soldiers. You’ll have to do a classy song instead.”

“Doesn’t matter,” the officer insisted. “You’ll have to change it.”

I hadn’t sung the song with any suggestive meaning. I had sung it as a straight, wistful love song. But I knew there was no use arguing about it. I’d been up against this sort of thing before. People had a habit of looking at me as if I were some kind of a mirror instead of a person. They didn’t see me, they saw their own lewd thoughts. Then they white-masked themselves by calling me the lewd one.

The officer was dubious, but he finally agreed.

“Try it,” he said, “and try not to put any suggestive meaning into it.”

We took a helicopter for the front. I didn’t see Korea and its battlefields and beaten up towns. I left one landing field and came down on another. Then I was put in a truck and taken to where the 45th Division was waiting. The 45th Division was my first audience after the wounded in the hospital.

It was cold and starting to snow. I was backstage in dungarees. Out front the show was on. I could hear music playing and a roar of voices trying to drown it out.

An officer cam back stage. He was excited.

“You’ll have to go on ahead of schedule,” he said. “I don’t think we can hold them any longer. They’re throwing rocks on the stage.”

The roar I’d been hearing was my name being yelled by the soldiers.

I changed into my silk gown as quickly as I could. It had a low neckline and no sleeves. I felt worried all of a sudden about my material, not the Gershwin song but the others I was going to sing—”Diamonds Are A Girl’s Best Friend.”

It seemed like the wrong thing to say to soldiers in Korea, earning only soldiers’ pay. Then I remembered the dance I did after the song. It was a cute dance. I knew they would like it.

This is where Marilyn’s manuscript ended when she gave it to me. 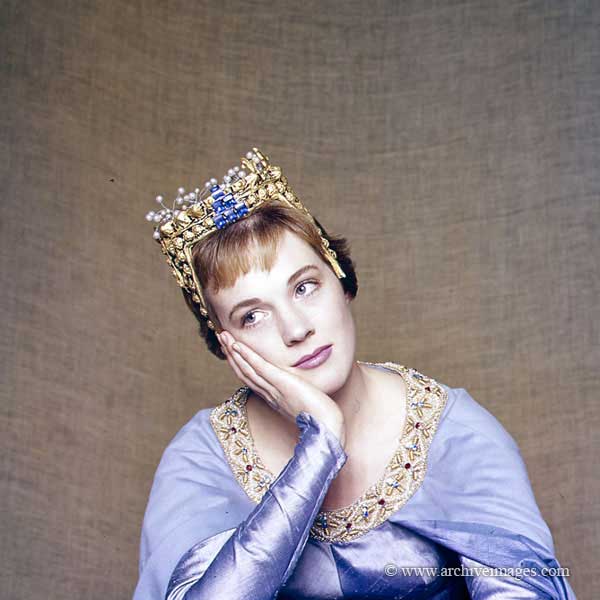 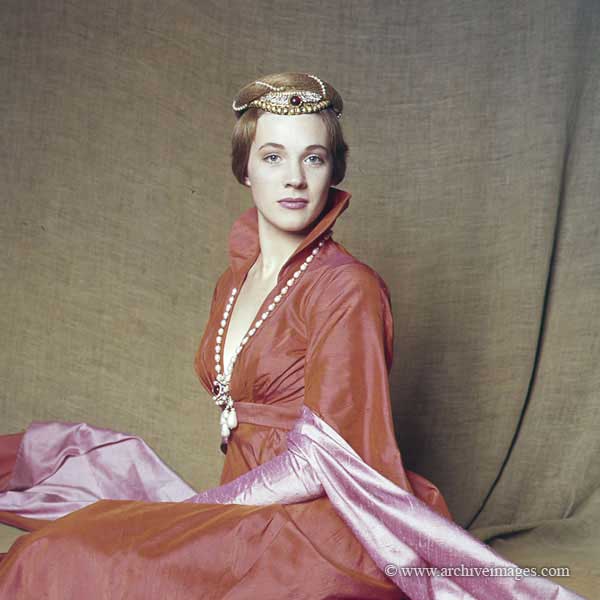 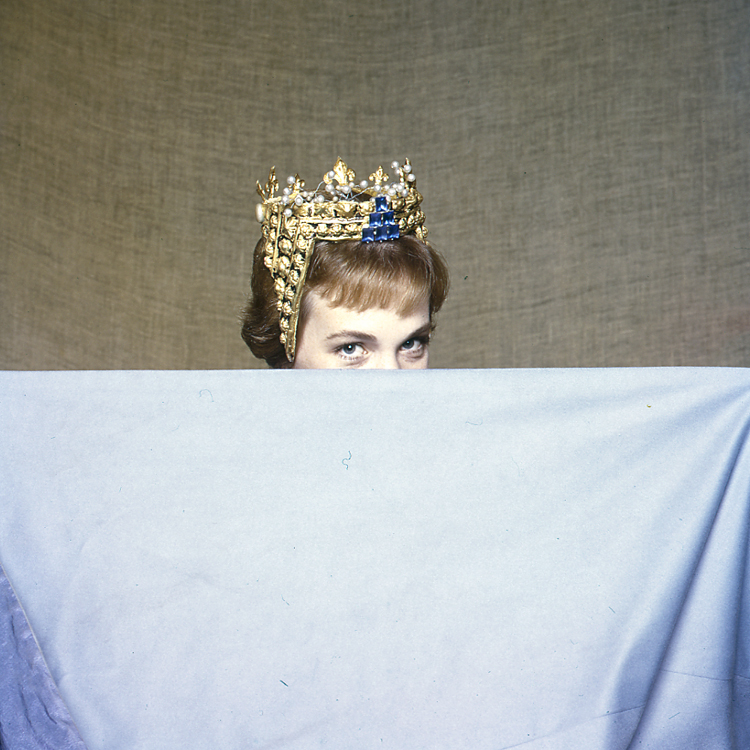 Julie Andrews poses for some publicity shots for the Boradway production of Camelot in 1960 taken by Milton H. Greene
"Arthur Jacobs, our good friend and Marilyn Monroe’s publicist, before he became a bigtime movie producer with “Planet of the Apes”, was contracted to do the PR for the Lerner and Loewe Broadway show “Camelot.” Arthur wanted a book done of “Camelot” from day one of rehearsal. So he went to the powers that be, Lerner, Loewe and Hart, and explained the situation. It had never been done before but they agreed that it was a good idea and Arthur, being an old friend suggested Milton. They all knew of him and were delighted that he would even consider such a project. Contracts were signed and everybody was happy. They were all pros. Milton’s reputation preceded him and even Richard Burton and Julie Andrews were impressed. Our beloved friend Roddy McDowell played the villain and it was a joyful experience from beginning to end. Milton's work on Camelot was used in the Broadway album, the playbill, and a substantial story in Life magazine. When it opened in New York, it played to packed houses at every performance. As we all know, the play “Camelot” became associated with the JFK administration. They were glorious years." 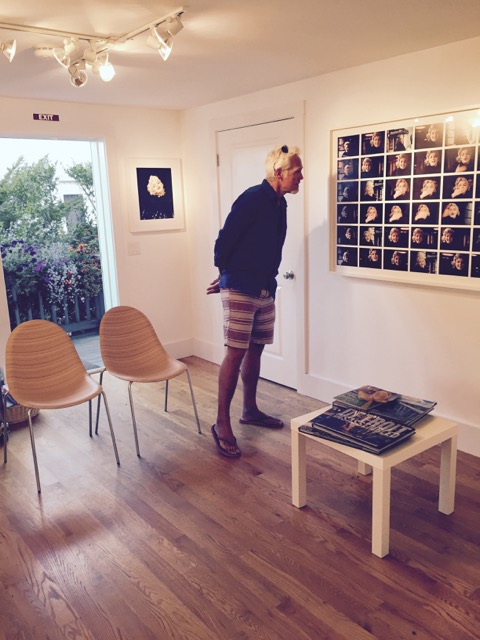 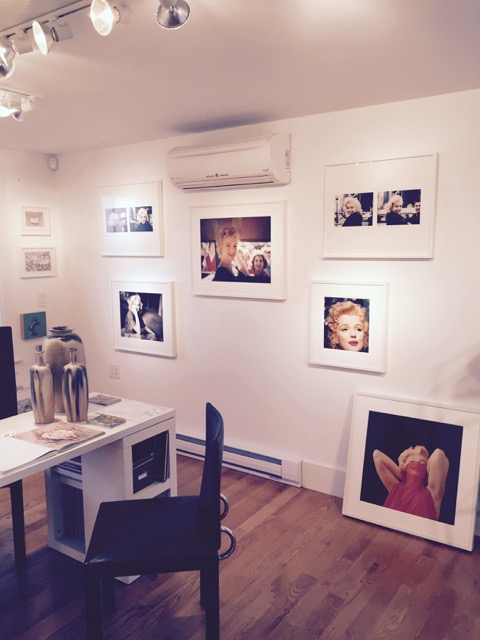 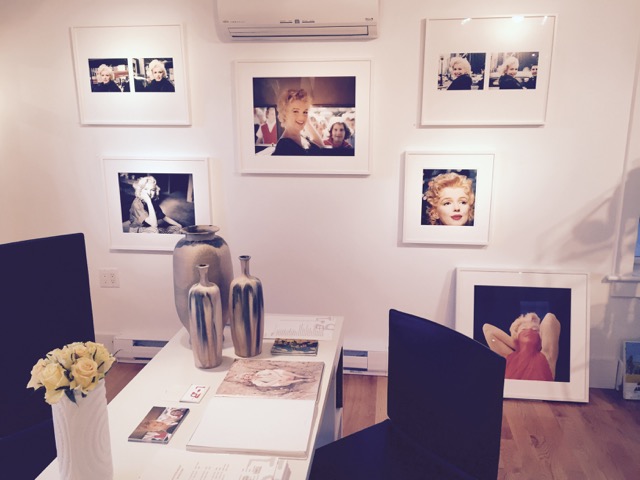 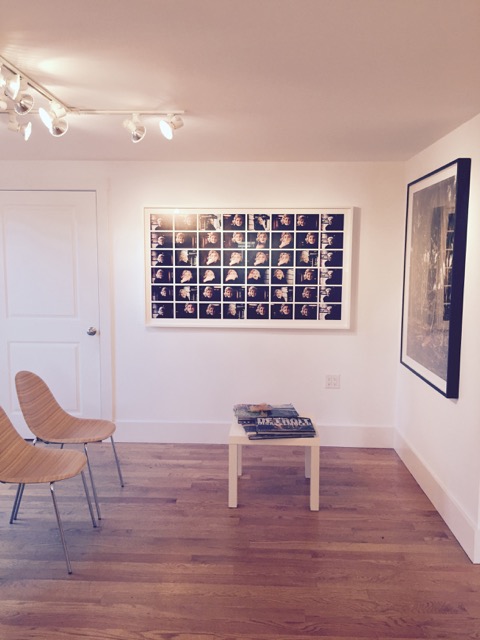 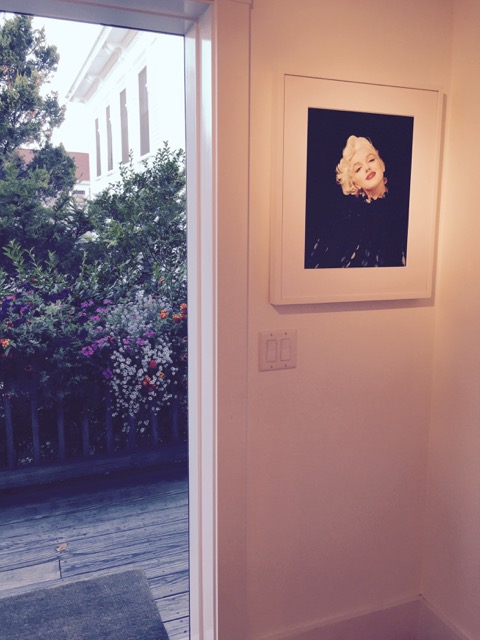 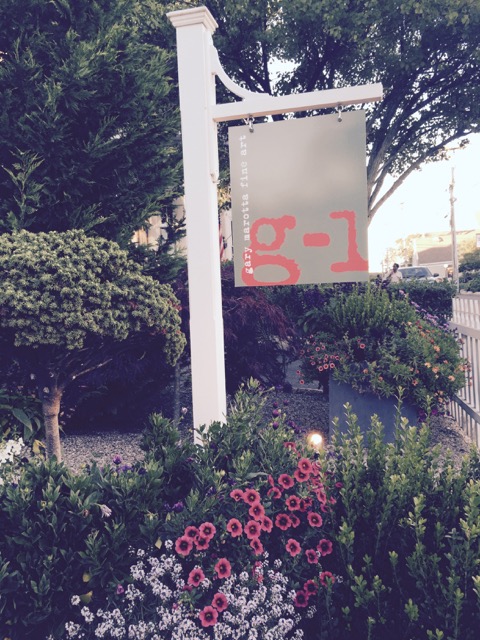 No Comments »
Marilyn Monroe's My Story: My Own Recipe For Fame 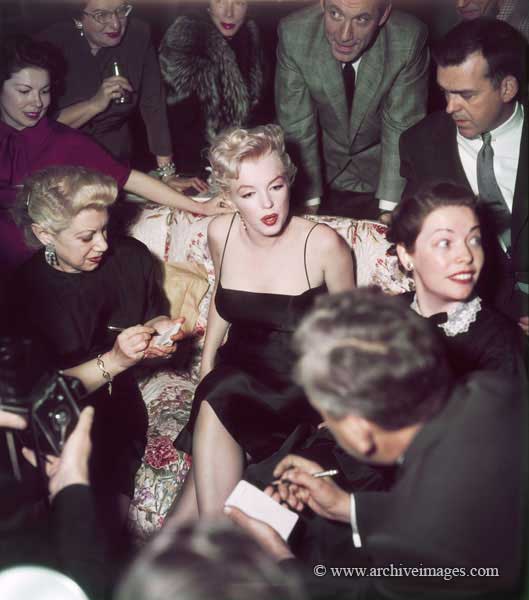 There are three different ways of becoming famous in the movies. The first way more often happens to men than to women. It happens suddenly as the result of a single performance in a movie.
An actor will go along getting jobs and doing good work and getting nowhere. Then all of a sudden, like John Garfield long ago or Kirk Douglas, Marlon Brando, Jose Ferrer, more recently—he will appear as a lead in a picture and wake up after the reviews as star for the rest of his life.
Occasionally this also happens to an actress, but the occasions haven’t been recent. The actress usually becomes a star in two other ways. The first way is the Studio Buildup. When the Front Office is convinced that one of their contract players has star possibilities in her, a big campaign is started. The Star Possibility is surrounded by various teachers and coaches. Word is sent out to all the Producers in the Studio that the Possibility is the biggest coming box-office attraction in the industry. And all the producers in the studio start fighting to get her as the lead for one of their pictures.
In the meantime the publicity department goes to work on the Star Possibility and floods the press, the wire services, and the magazines with stories about her wonderful character and fascinating oddities and thousands of photographs.
The columnists are bombarded with announcements about the possibilities of every sort, from a half dozen impending marriages to an equal number of starring vehicles.
Pretty soon the whole country gets the impression that nearly all the eligible romantic males of the land are trying to marry the Possibility and that she is going to appear in half the important movies produced in Hollywood.
All this takes a great deal of money and powerful efforts on everybody’s part except the young actress on whose brow the Studio has decided to weld a silver star.
The other way to fame open to the actress is the way of scandal. Sleep with a half dozen famous Don Juans, divorce a few husbands, get named in police raids, café brawls or other wives’ divorce suits, and you can wind up almost as much in demand by the movie producers as a Bette Davis or Vivien Leigh.
The only trouble with becoming famous as a result of a half dozen scandalous happenings is that the scandal-made star can’t just rest on her old scandals. If she wants to keep her high place in the public eye and on the Hollywood producer’s casting list she has to keep getting into more and more hot water. After you’re thirty-five getting into romantic hot water is a little difficult, and getting yourself publicized in love triangles and café duels over your favors needs not only smart press agents but also a little miracle to help out.